I've been using cast iron since about 2007, and got thrust into the fire at the outset by the need to re-season my great-grandmother's ancient, and then very rusty, Griswold cast iron skillet set. My first foray worked quite well, using peanut oil and an oven set to 500°F, but as you can guess this produced a lot of nasty-smelling smoke that required me to evacuate the kitchen for several hours and deactivate the smoke alarms.

After the lovely housekeeping folks at the Atlanta Midtown Residence Inn decided to run my beautiful skillet through the dishwasher: I took the event as an opportunity to try a different, and hopefully less noxious, method for seasoning. This hillbilly: 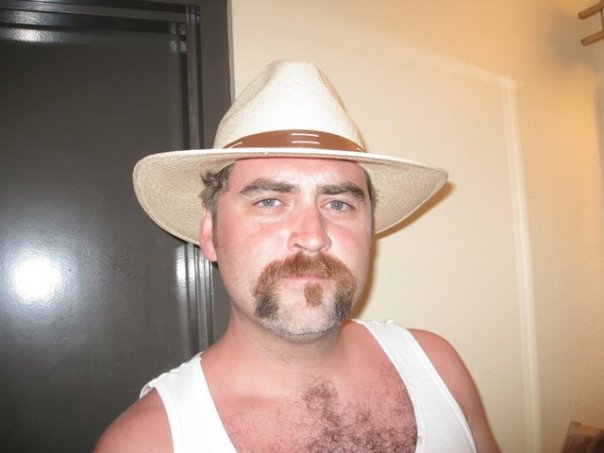 gave me the idea to use the grill instead of the oven, which may not seem like such a leap of intution, but damned if I didn't think of it. (Thanks, John!)

The reason I decided to use lard for this re-seasoning rather than peanut oil was that lard is a lot less expensive than peanut oil, it's easier to deal with something that is solid at room temperature, and lard's lower smoke point doesn't really matter since you're just turning the shit into carbon anyway: there won't be anything left to smoke on subsequent high-temperature cooking events.

Stripping what remains of the old seasoning

Before adding new seasoning to an imperfect piece of cast iron (that is, one with rust or some other contaminant that needs physical removal), the old seasoning must be destroyed. The way to do this with the least physical work is to use a lye bath: My lye bath comprises a bottle of sodium hydroxide (typically found near the Drain-o in a supermarket or Home Despot) added to a rubbermaid container filled with water. Note the order: add the lye to the water, not the other way around. The precise ratio is not really important, since you're going to leave the piece in there for two or three days.

CAUTION: Lye is highly caustic and can cause horrific chemical burns. Always use long (one foot or longer) neoprene gloves and chemical goggles when working with lye, and take care to make sure no solution gets inside the gloves.

The tastiest part of the procedure is next: cooking bacon. Since you'll be using lard to season your skillet, you need to cook a bunch of bacon. Cooking a lot of bacon is a bit of a chore, but the upside is that you get to eat a lot of bacon. I do not, however, recommend doing this all at once: cooked bacon freezes fairly well, and makes for an easy breakfast when you are in a rush in the morning.

A half-pound per piece is probably generous, and will leave you enough to make eggs for a while afterwards. Save the grease in a coffee can, let it congeal, top it, and then stick it in the refrigerator for use in the seasoning step. If you have a heart condition or just don't like bacon (something with which I simply cannot relate), you can also buy lard in blocks at the supermarket. It is typically near the butter in the refrigerated section.

After two or three days have passed, pull the piece out of the lye bath while wearing your neoprene gloves and chemical goggles: Scrub it with dishsoap and a copper or stainless steel scrubbie: and then thoroughly rinse it with water so no soap residue is left. Dry it with paper towels and then put it in a preheated oven for about 10 minutes to evaporate the rest of the water, so no new rust forms: Once it is dry, you'll want to take a power drill with a wire brush attachment to it to remove any rust: and then wipe off any resulting particles with a dry paper towel. A pleasant shade of gray: At this point, you're ready to season.

Start your grill. I use charcoal. If you do too, use a lot of charcoal: I used 1½ chimneys worth of charcoal, which is quite a trick. (Hint: don't light it all at once :-) ). Get it really frakkin' hot: I managed to get mine to 500°F for a little while, but mostly it was around 450°F.

As my buddy John said, "Grease that fucker up": For the first coat, I put it on cold, which made it kind of thick and required more wiping while hot than the subsequent coats, but lard isn't all that precious given how easy (and tasty!) it is to get more.

Once greased, both inside and out and including the handle, put it on the hot grill upside-down. If you don't put it on upside down, you will end up with a mess of sticky grease in the inside edges of the skillet. At this point, I just let the piece cook until the smoke output drops substantially. (This is where doing this outside really helps.) I usually keep the cover closed, but with a charcoal grill you will get higher radiant temperatures with the cover off, as more airflow = faster fuel usage. How this affects the seasoning process is unknown to me. For propane, you will obviously want to keep the cover closed since there is no corresponding power increase with increased airflow, so the only direction for the cooking surface temperature to go is down. Then, pick up the piece (with hot pad gloves on both hands—trust me!) and wipe it down with a paper towel to remove the excess grease drops and runs, so they don't turn into a sticky mess. Put it back on the grill (upside-up or down, it doesn't matter) and let it go for another 5 minutes.

Repeat the seasoning step once or twice, letting the piece cool down to the high 100°'s before re-applying the lard. Make sure to use hot pad gloves every time you touch the piece; seasoning is rewarding, but especially so when you don't end up with second-degree burns!

Before storing the piece, I usually pour on a tablespoon or so of olive oil and wipe it evenly around the entire piece, inside and out, including the handle: What you have now is a good start. A piece of cast iron is never really "done" seasoning: every time you cook with it, you season it a bit more. Ideally, you would never have to re-season, but as we all know, accidents happen, which is what motivated this how-to in the first place.

Especially for the first week or so, it is very important for you to regularly oil the surface of the piece, both inside and outside. Believe it or not, cast iron is permeable and soaks up oil, leaving the surface dry and vulnerable to rust from atmospheric humidity. If you don't regularly degrease and oil parkerized 1911's, you will be surprised at how much oil the metal will soak up! I use olive oil for this purpose, but I suppose you can use lard, though storing it with lard slathered on it is probably a lot messier.

Depending on how carefully you use and/or store a piece, you may get surface rust. I ended up getting surface rust on my 12" skillet and dutch oven while canoe camping in Maine, because we didn't have enough oil to season them between uses, nor any convenient way to remove the excess oil after seasoning as paper towels are bulky and terrycloth towels filled with grimy oil are not really convenient or pleasant to carry around for several days.

As a result, they came back home rusty. To fix this without a complete strip and re-seasoning, my friends suggested I use a mix of salt and oil to remove the surface rust. I wound up using coarse sea salt (2-3 mm diameter pieces, like what you'd put into a salt mill), olive oil, and a copper scrubbie: the coarse salt provides enough abrasion while the copper scrubbie holds the salt in a way that is useful for scratching the surface of the iron efficiently.

This worked fantastically: if anything, the pots are now blacker and shinier than they were before the trip. I suspect you should think of this process as something like polishing: however, instead of a fine abrasive like you'd use to polish glass, it's a coarse abrasive that puts exactly the desired finish on a piece of cast iron cookware. I don't believe the copper scrubbie was doing the work of removing the rust: although I don't have any definitive proof, I think the salt was doing most of the work, with the olive oil acting as a lubricant to allow the salt not to bind to the iron during the polishing process. Use the olive oil sparingly: only about a teaspoon was needed for the entire inside of my 12" skillet, for instance.

The entire transition from dry-and-rusty to refinished-and-ready-for-storage for all three pieces—the dutch oven, the 12" skillet, and the cover for both—took about 20 minutes.